Is Boxing/ Thai Boxing the right Martial Art for You?

If you’re thinking about doing Kickboxing and Boxing, I applaud you. I think these are great martial arts, very alive. I have a lot of practical value if you’re trying to, let’s say transition or move into MMA.

The only thing I will say about Boxing, Kickboxing & Thai Boxing is, they’re not really for self-defense, they are for fighting. They’re really just for being aggressive and choosing to attack and fight, because if you’re at a range where you can box or kickbox, you’re also at a range when you can run.
So, if what you want is self-defense, then Kickboxing & Thai Boxing is absolutely not what you should do, you should be doing Jiu Jitsu which deals with being in close range with people.

If your idea of doing Kickboxing is cardio, I will agree that cardio Kickboxing is a lot of fun. I’m sure it’s got a lot of utility in the sense that enjoyment can drive your exercise, but I think if you have any presumption that cardio Kickboxing is making you good at fighting, then I think you’re just fooling yourself. Those are pretty much dead drills; you’re never dealing with an alive opponent who’s moving around and pacing you.
Beyond that, I love Boxing and Kickboxing, but unless you are quite good at Boxing or Kickboxing, you’re really talking about a significant amount of time that you need to put in to be able to handle someone 50 to 100 pounds heavier than you with that skill set alone.

One of things I like about Jiu Jitsu in contrast to that is that you can handle someone 50 to 100 pounds heavier than you because you don’t need to put them in the ICU, you can just be using it to get yourself free and get away. You can be using it to hold top position and keep yourself out of danger and I think it’s a little bit more effective in that regard.

That being said, I think if you are looking to transition into MMA in particular, so you’re actually wanting to learn combat, you just think combat is cool, I think combat’s cool too, I really think it’s fun and a super enjoyable kind of thing. I don’t ever intend to get in a fight with anyone ever, but I do find combat really exhilarating and fun. 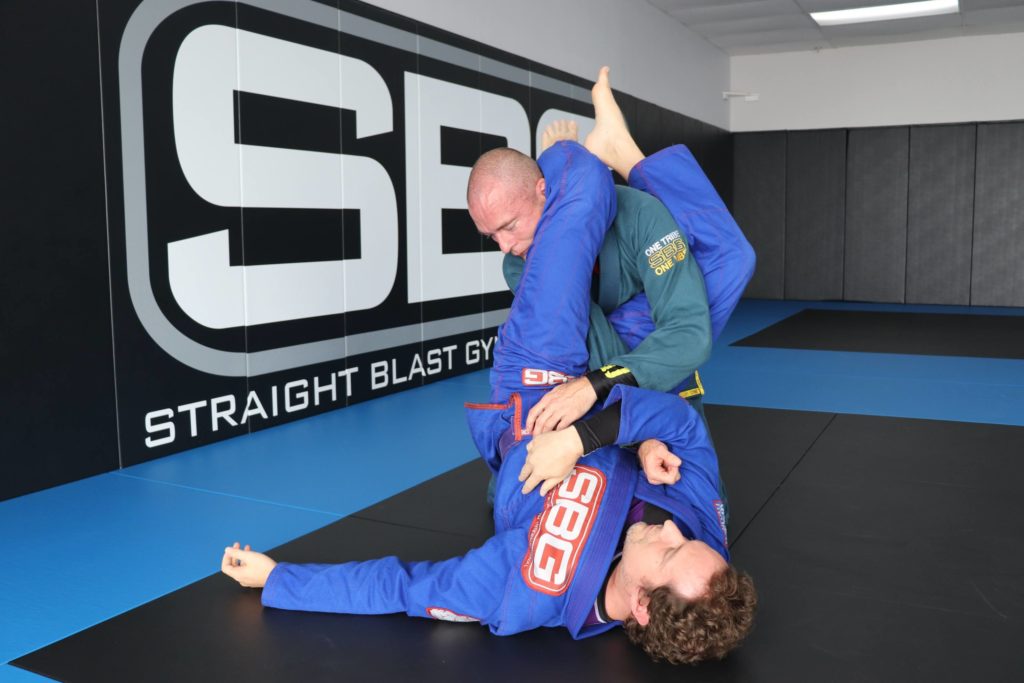 You should head down to SBG New Braunfels and give Jiu Jitsu a try. Get yourself started off in something that is going to teach you about relative workload, is going to teach you about how to pace, how to control aspects of a fight. Jiu Jitsu has a lot more control to it than something like Muay Thai, which is wild out in the open. But what I found is that I started with Jiu Jitsu and around my blue belt, I picked up Boxing and I really felt that Jiu Jitsu gave me a huge edge in understanding Boxing because I had an understanding of aliveness and dealing with an alive opponent. So, when I was working the heavy bag and I was working my shadow Boxing and stuff like that, I had a pretty good sense of how dead those patterns could be and really thought about and could conceptualize the idea of a moving target and moving opponent, and that makes a big difference in the way that you train.

I see a lot of guys that are doing Boxing or Muay Thai and one of the things that stunts their growth is, they completely transform their style, when they shadowbox, or when they hit the heavy bag, into a place of non-reality where they’re just imagining being able to level the biggest hardest shots at all times. They’re not really working on movement angles and making sure that you’re being responsive in an intelligent way.

I think all the years of Jiu Jitsu made that very clear to me, that I needed to always be thinking about that when I did drills, particularly solo drills. The other thing that Jiu Jitsu really helped me with was gave me a tremendous appreciation for technique, and now I guess I’ll sound kind of braggy, but my Boxing coach would mention a lot of times that I paid better attention to him in terms of how you throw a right hook, and how you throw a left hook, and how you throw an upper cut. I was always really trying to get every detail exactly correct on every move that I used, even when it was dead. I think that overall, a lot of other people, what I would see in the gym, they’d never done any background, when they threw hooks and they threw uppercuts, especially on the heavy bag, they just thought about throwing with arm strength and throwing with tenacity but never really understanding the concept of angles, using your entire body to leverage power, throwing with looseness. I’ve really found that when you really do Boxing well or even when I’ve learned Kickboxing, it’s all about understanding how to do the most with the least, and in that sense, I think that is the very definition, for me, of Jiu Jitsu in a lot of ways, how to do the most with the least.

If you start with Jiu Jitsu, you gain a really strong appreciation for why efficiency of technique matters in terms of both conservation of energy, which leads to you trying to transfer onto your opponent a higher relative workload. I think that Boxing is exactly the same, if you look at a high-level boxer take on a nobody who’s pretty strong, usually the goal is not to put them away in the first round, they actually usually just they wear them down. It’s all about efficiency and by the second or third round the higher-level boxers are simply more efficient and as a result, the punches are still coming with high power, but they’re not exhausted.
Jiu Jitsu, I think gave me the mindset to train Boxing and Kickboxing that way, whereas I think if I had not learned that I would have approached it very differently.