So, you’re interested in learning Aikido in the New Braunfels area. Well, as far as I know, there are no gyms as of 2021 in New Braunfels offering Aikido. Now, let’s take a look at what made you interested in Aikido.
I would assume it stems from its philosophy of peace and maybe you’ve seen some demonstrations of it in which you saw the aesthetics of it and the flowing movements, and you wanted to see if it was really very effective or fun to practice. So, I can answer both those questions.

One, is it is fun to practice? I practiced it in Japan. One time I went to a class when while I was living in Japan which was back in like 2005 or so and I went to an Aikido class night. A whole lot of fun. As to whether it’s effective or not I can only say that it is not a particularly effective martial art if your goal is self-defense or to be able to do anything really combat related. There may be a handful of moves that work but they work under very specific conditions and whenever those conditions are not met the art form pretty much falls apart. An example of that is that when I was training with my friend who did Aikido and his head teacher, the sensei, the black belt, called me up before the class and asked me to be his demonstration partner and we had a foam knife and he told me, “Okay, stab me with this foam knife”, but then it was like “Okay, but don’t stab me that way” and “No no no, not that way, no not that way, articulate your wrist about 45 degrees and stab in this way”.
So, I finally stabbed the way that he wanted me to stab him, and I was totally being complicit in this and actually very helpful, I really liked the guy, and I wasn’t at all trying to show him up or anything. I didn’t know anything about martial arts at that time, so I stabbed in the way at the perfect angle, he caught my arm and we spun around in a circle for what seemed like ages, maybe just a minute. We kept circling, he just kept spinning me around in a circle but I was still running on my feet and I asked him as I was running “Am I doing something wrong? I’m not trying to be a jerk, what should I do?” and he said something very important, he said “No, if my art really works you shouldn’t have to help me to make it work” and right there he really said everything about Aikido in my opinion, but I’ll get back to that in a moment.
So, we tried again I stabbed him at the perfect angle he spun me around and this time he was able to make me fall, and he had some sort of wrist lock or arm lock and I tapped on his arm, and I was like “Oh, that was cool”, I thought it was neat at the time, I was kind of impressed.

Years later when I started doing Jiu-Jitsu and I started sparring, especially before I learned any Jitsu, I started sparring with some of these guys that had been in Jiu-Jitsu for easily the same amount of time that that sensei had been doing Aikido, and the most noticeable difference was, I was literally trying to stop them. I was doing everything I could to not just stop them, almost like hurt them. I was wrestling them, and I couldn’t do anything to them, they were flipping me all over the place, they were submitting me with arm locks and chokes from every angle. I wasn’t ever trying to help them do the technique, I was always trying to stop them from doing the technique and I could not stop them and that is what’s beautiful about Jiu-Jitsu is, you don’t need someone to be complicit for the art form to work and if you need them to be complicit then I don’t think that’s a legitimate form of self-defense.

Aikido for all of its great philosophy and all that kind of stuff, at the end of the day it doesn’t really function as a martial art. So, if what you like about it is the aesthetics and the movement and all that, you might consider just taking up dance instead of aesthetics as your main interest. But if your real interest is martial arts, I would suggest Jiu-Jitsu. 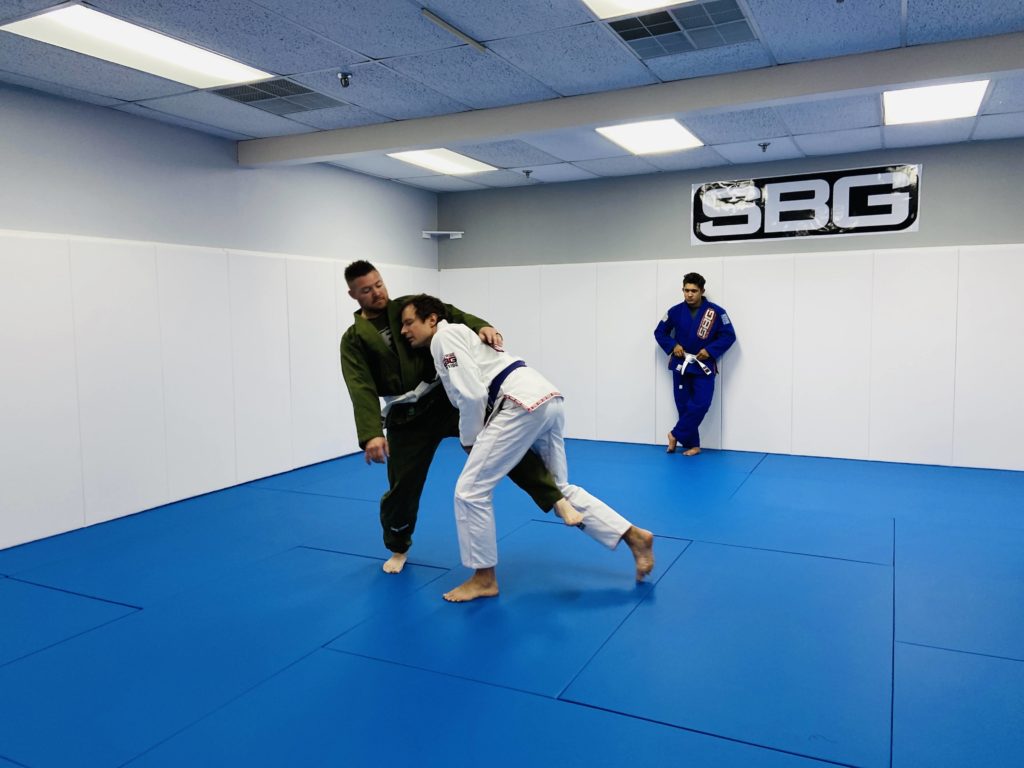 In Jiu-Jitsu you’re going to learn how to throw people to the ground, you’re going to learn how to put people into arm locks and chokes that they’re going to have to submit to or face unconsciousness or injury and I really believe that with a decade of Jiu-Jitsu practice that I have, I can actually stop people and I can do it without really hurting them very much. I mean it won’t be pleasant for them, that would be absurd to think I could do something that would be pleasant for them, but I can pretty much stop a person and not like literally stop them, completely stop them from a course of action and not have to put them in the ICU to do that. I actually have control and I have dominant positioning on my side to be able to make someone stop and I think you really have to experience that to understand it. I mean it’s why Jiu-Jitsu is such a huge phenomenon right now, is because people actually go in, they give it a try and they say, “Whoa that actually worked” and that wasn’t just like I gave it to you or something like that.

The last thing I’d like to say, and I don’t mean to get too down on Aikido, but a lot of what is said and a lot of what is said about their founder kind of amounts to a lot of superstition. I mean the guy was in the black dragon society, he went to Manchuria during World War II to promote Japanese supremacy over all of Asia. Even closer to his death when questioned very directly, it seems that a lot of translation from Japanese into English went quite a bit askew and at the end of the day, we know that the founder of Aikido was a totalitarian who believed in the absolute divinity of the Japanese emperor and believed in Japanese supremacy. So, I don’t know the idea that he was really preaching, like a huge peaceful doctrine, I think is actually a little bit false and I know the more we go back, and we watch some of the rare footage of him practicing Aikido in the 30s, I mean it looks like ballroom dance practice, there’s nothing particularly legitimate about the self-defense credentials of Aikido. I mean unless you feel like you really want it, unless you take Steven Seagal extremely seriously and you want to be the next Steven Seagal, maybe go do Aikido. But if you want to learn a martial art that is practiced by real martial arts competitors, trying to achieve real dominance and safety within a fight, you should really come and learn Jiu-Jitsu.

Really, one of the very best students that I ever had at our program is a college student who was looking for Aikido and the Aikido gym had already closed in New Braunfels, so he ended up finding us and he felt that we were the next closest thing to the philosophy of Aikido that he was looking for and I think he was so lucky to have found us just because we actually are going to preach a philosophy of how to defend yourself and not really have to hurt people to stop them from a violent course of action. But at the same time, we’re actually going to teach you real martial arts techniques that actually work in environments where there’s aliveness and resistance and people who are not just complicit and allowing you to do what you want to do so you can feel good about yourself.

Come, learn some Jiu-Jitsu, come on in. Everybody can get a free class and just give it a whirl. We’re in New Braunfels and should be able to find a link at the bottom of this.

Have a good one.

So, you’re looking for Kung Fu in the New Braunfels area. Well, good for you

You are interested in training in Taekwondo, which is a Korean martial art and I