Why Is Jiu Jitsu superior to Taekwondo

You are interested in training in Taekwondo, which is a Korean martial art and I think it’s great that you want to get off the sofa, do something physical, and if I had to guess, probably you’re interested in getting some kind of exercise that has some applicability. I would presume that’s what has attracted you to Taekwondo in particular, is you probably either you saw some really cool demonstrations of jump kicks and high kicks, or for you maybe taekwondo is just a term that means martial arts and you assume that all martial arts are the same. I can understand that approach entirely.

Now, I’ll give you my opinion on taekwondo and training within it. I think that the jump kicks in Taekwondo look admittedly super-duper cool. I think they’re something that’s really pretty challenging to achieve and I just personally believe, for the amount of effort and time that you’re going to put into doing that really cool looking jump kick, let’s say it’s going to take you maybe 50 hours of time investment to be able to do a super cool jumping spin kick, you have now learned a move that has about, I would guess about a one percent chance of working in a self-defense scenario or any kind of real combat scenario.

One thing that we know from the last 20-plus years of MMA is that jumping, spinning kicks are not high percentage moves in terms of being able to knock someone out, stop a fight, or even just even be able to do them. Even being able to land them once you’re fighting someone who is intent upon doing you harm, it’s exceedingly difficult to land jumping, spinning kicks.
The other thing is, those jumping, spinning kicks, is they’re actually pretty hard on your knees and your ankles. You’re doing a lot of rotational force into your knee which, in time, can be a bit of a problem, especially if you’re an adult. But you’re like ‘Well, it’s okay I’m just trying to get my kids into it’, I understand that. 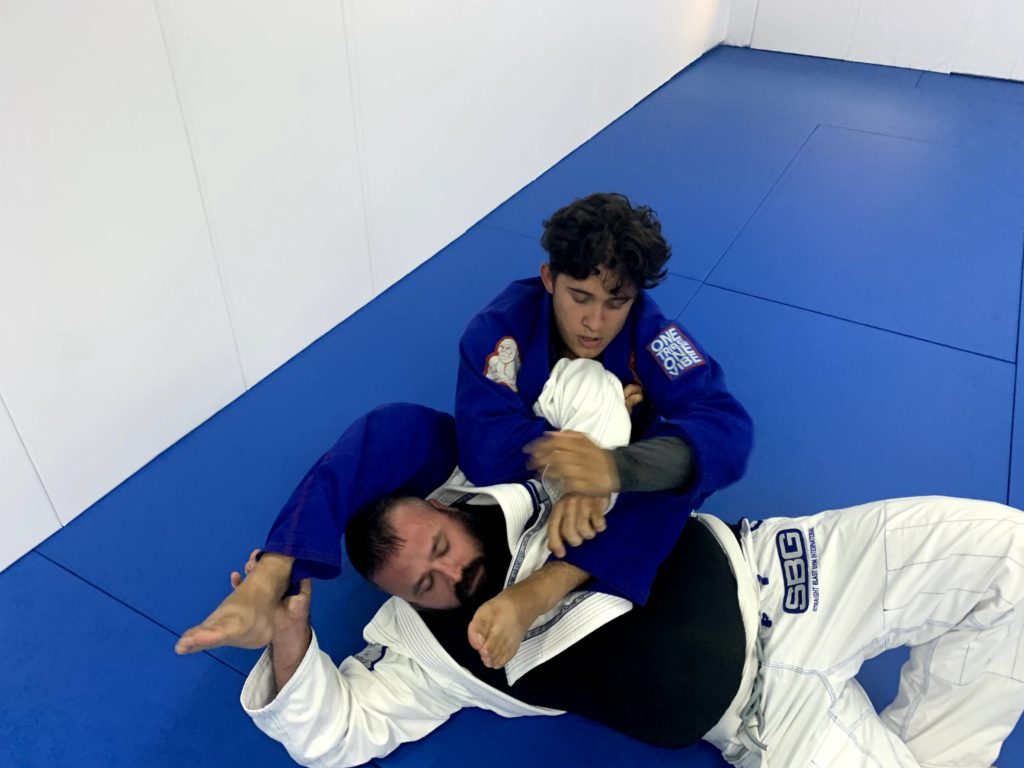 So, it’s a Korean martial art and I lived in South Korea for 13 and a half years, my children were both born in South Korea, and I actually had my daughter in Taekwondo. Now, the reason I put my children in Taekwondo was simply because they had a good pickup service from her school. They would pick her up from school and that way I didn’t have to come home earlier from work to get her and that was just a useful service that I used for a certain amount of time.
In time I had her actually show me you know her moves and while they looked kind of fun and cool, I was so happy when I started my Jiu-Jitsu gym because I was then able to actually train my children to do Jiu-Jitsu and comparatively speaking, Jiu-Jitsu has changed my children completely. Whereas Taekwondo had these neat little kinds of jumping around, little kicky drills that my kids from learning Jiu-Jitsu now actually know how to make it very hard for someone to try to abduct them, know how to get out if somebody gets on top of them and tries to hold them. They are a real handful for anybody trying to restrain them and I feel really good about that in terms of my daughter in particular, just watching her she is able to handle boys bigger than her, a little older than her. She can take them down, she can take them off their feet, put them on the ground and be on top of them and actually perform arm locks and chokes. If she were to choose to choke me unaware, she could actually render me unconscious. She can do all of that at the age of nine.

When she would come back from taekwondo and show me what she can do, I guess she’s throwing this kick, yeah, it’s got a little velocity to it, have her kick my hand as hard as she can, I mean it doesn’t even really hurt, it’s like it stings but like there’s no real value to it in terms of self-defense. She’s not going to be able to actually marshal that against anybody really trying to do her harm.

All right, so my opinion is, I know there’s something really cute and cool looking about the whole Taekwondo thing. A lot of gyms are really clean and well run and you’re like ‘Yeah, but I just want discipline and I want focus from them’ and I think that’ll give that to them and it will, but what I’m offering is, by teaching your kids, having your kid learn Jiu-Jitsu or having you learn Jiu-Jitsu, you’re going to get all that discipline, you’re going to get all that focus, but you’re also going to get a martial art with a real winning record against fully resistant opponents in low rules situations. And I just feel like if you’re going to pump 50 hours of your life, forget your money, your money is like the least important thing that you invest in, in my opinion. If I am going to invest my time, I would rather put those 50 hours into something that is going to make me actually very capable of defending myself, rather than something that just would look cool at a party but have almost no practical application if I had to actually use it to defend myself.

So come on down and learn some Jiu-Jitsu. You owe it to yourself; you owe it to your kids to put them in a program that’s going to take their time and not just create a bunch of flash. You’re going to give up some time, obviously there are costs, but you’re going to put that into something that’s really going to produce real results in the long term.

Is Boxing/ Thai Boxing the right Martial Art for You? If you’re thinking about doing