You’re looking for Krav Maga in the New Braunfels area and I want to first and foremost just say that I think that your mindset is a great thing. Your mindset is one of self-defense and one of wanting to be strong enough to protect yourself and to protect people around you and that is something that should always be commended. That is a good way to think, that is a good way to approach life, is to be strong enough, strong enough to be safe.
Now, I don’t teach Krav Maga, and I have very limited experience with it, but I’m going to give you my thoughts on Krav Maga and why you might be better served doing something other than Krav Maga to achieve the goal that you have of self-defense, being able to defend yourself and others.

Now, one of the big appeals of Krav Maga that I hear all the time is, this is what the Israeli special forces practice and I don’t really know how true that claim is, but I would just like to offer this. I do have a few acquaintances that are pretty high-level military people. If you go and check out the ‘Cleared Hot Podcast’ I was on, Andy Stump’s ‘Cleared Hot Podcast’, I know Andy, Andy is a former navy seals sniper and he trained at a very elite level within military and what Andy has said is that they do very, very little hand-to-hand combat training because, and this will be maybe a big shocker for some people, the most effective training that they can do with soldiers is with weapons. Things that shoot bullets and missiles and things like that.
I mean that’s what military trains with primarily, not hand-to-hand combat. If it’s getting to hand-to-hand combat, we’re talking about from a military perspective, I would say a failure scenario, like a last-ditch hope scenario. So, you would be better served as military to put your primary training into firearms, and I think it’s great to be trained in firearms, I don’t see any problem with that.

Now, let’s assume for a second that the Israeli special forces do train in Krav Maga all the time, let’s look at what a military goal is versus a civilian goal. You’re a civilian, your goal in my opinion is, should a violent situation occur, your primary goal should be to get away. That should be your primary goal in any kind of self-defense scenario and the only thing that’s going to keep you from getting away is somebody getting a hold of you or getting on top of you and if they’re getting a hold of you or getting on top of you, that’s where the martial art of Jiu-Jitsu is going to shine.
That’s where Jiu-Jitsu is going to give you the ability to get up, get free and get away and that’s why I think Krav Maga kind of falls short of something like Jiu-Jitsu in terms of self-defense, because Krav Maga being based in a military mindset. A military mindset is to finish people and to act first if the situation presents itself or allows itself to work out that way, but that’s all stopping people.

My opinion is, the first thing you need to learn in self-defense is how to get yourself safe, how to get yourself away. Then, I like to show people, once you know how to get yourself into dominant safe positions, then I’m going to show you how to finish people, how to stop people. But even there, stopping people, often what I see from Krav Maga videos is stopping people means doing something that’s going to put them in the ICU, going to give them critical injuries, and I’m not a big fan of that from just a litigation standpoint.
I would prefer to have a way to stop people where I could potentially do that without having to do grievous injury to them. I’d like to be able to put them into a choke. If I put you in a choke and I put you unconscious and I’m sure Krav Maga has got some chokes in there. Well, say if I put you unconscious with a choke, I can stop that without having to murder you and I can stop. I can put you unconscious and actually potentially tie you up or just get away. I can always just get away in those scenarios.
With a lot of the arm locks that I do in Jiu-Jitsu, I can apply the pressure of the arm lock so that you know with certainty that your arm would break if I continued but I train to have control within those scenarios to be able to offer you an opportunity to surrender. I don’t have to go all the way to injury, I actually have the option of not injuring you. 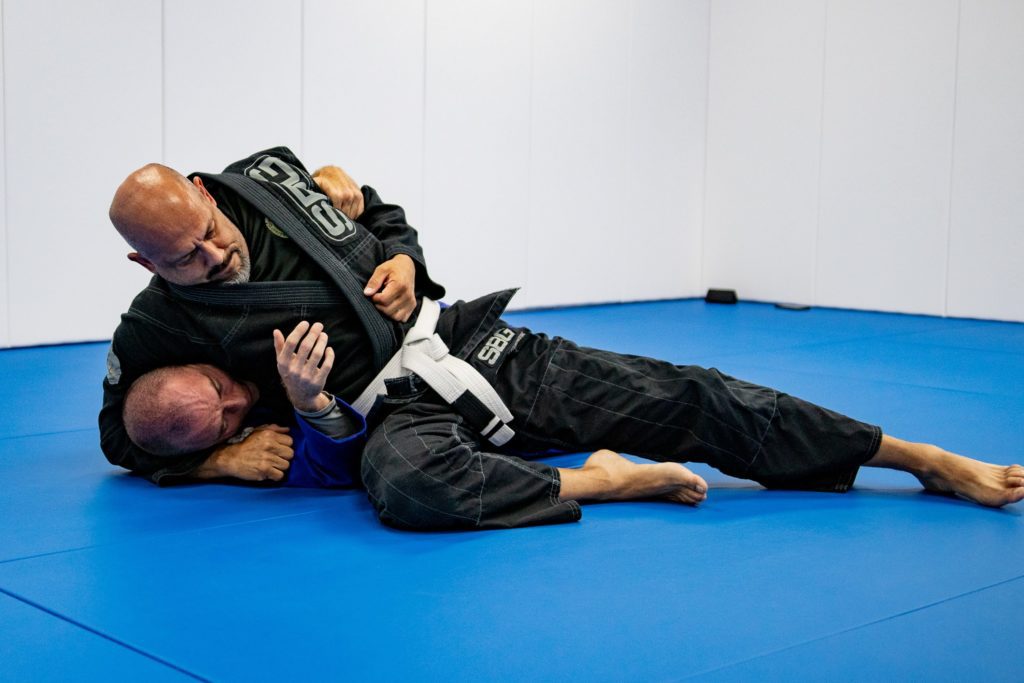 Now, with Jiu-Jitsu and the dominant positions that I take on people, I can always choose to injure I, I could always do that, it’s very easy for me and I usually show people the potential to do injurious strikes and things like that from a better position, but my goal is to be in a position where you can’t hurt me, but I could choose to hurt you.
What I see from a lot of Krav Maga stuff is not so much a choice as you have one option which is I’m going to jab you in the eyes or I’m going to jab you in the throat or something like that and my opinion is, if that goes before a court of law, particularly certain states, that is not going to be kosher. You are going to be in some trouble there and it may be looked at as an escalation of violence beyond what the person was doing to you. I show people how to get out of stuff early, how to determine if someone is what I think of as like a human predator, someone that actually has very bad intentions. We’re teaching multiple stages of engagement so that we try to avoid the worst possible stages of engagement.

I feel like a lot of Krav Maga stuff, though well intended, sort of suits people that have something of a self-defense fantasy of an opportunity to justify violence against another person. My goal is to end violent scenarios as quickly as possible and with as little collateral damage to both myself and to the other person as possible. There are many situations where you may feel threatened and find out later that the person threatening you maybe was just mentally unwell and that was a real temporary thing. That could be just a major lapse for them, they could be on some sort of spectrum or something like that. I would rather have options to subdue people safely and without doing excess damage to people and I feel like that’s just something you’re not getting in the Krav Maga world.

The other main thing, the final thing to say about Krav Maga is, Krav Maga loves to talk about ‘We don’t do any rules so we can’t compete in any way with anyone’ and that’s just a really suspect claim because ultimately, any martial art worth its salt can be tested, can be shown to be effective in a very limited roles environment. We know that Jiu-Jitsu works because we’ve seen it tested in environments where there are so few rules where like the only fighting rule in the early days of MMA were just no eye gouges, that’s it, just no eye gouges. No time limits, no weight classes, and these Jiu-Jitsu guys go out and smoke people from other martial arts disciplines. If Krav Maga was as dangerous as people want to claim that it is, there would be Krav Maga fighters that would compete. They would be able to use parts of their style within limited rule environments and actually display great ability and there’s simply no proof of that.

You should come down to our gym, New Braunfels, Texas, SBG Texas, come learn some Jiu-Jitsu.
Come to my foundations program, learn how to be really safe, learn how to really defend yourself from people that are trying to do harm to you and just don’t waste your precious time and energy on claims that cannot be verified.
Every claim that I’ve made in this video, we could sit down, and I could prove it to you with documented video evidence that would take us all day because there was just so much evidence that we could continuously go through.